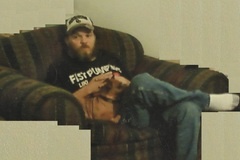 Aaron Monroe Harris, Jr. died October 24, 2015 at the age of 40 years 5 months 14 days. Funeral Services are scheduled for 2:00 PM, Wednesday, October 28, 2015 at the General Assembly and Church of The First Born in Purcell. Interment will follow at Lexington Cemetery under the care of Wadley’s Funeral Service.

Aaron was born May 10, 1975 in Tulsa, Oklahoma to Aaron Monroe and Doris Ann (Simmons) Harris. He was raised mostly in Lexington. Aaron worked for many years as a trim carpenter, but was a jack of all trades. He enjoyed fishing, video games, OU and Dallas Cowboy Football. Aaron was a member of the General Assembly and Church of the First Born.

To order memorial trees or send flowers to the family in memory of Aaron Harris, please visit our flower store.