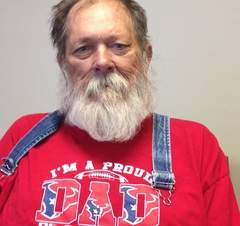 Aaron Monroe Harris, Sr. died May 14, 2017 in Norman, at the age of 66 years 3 months 7 days. Funeral services are scheduled for 10:00 AM, Saturday, May 20, 2017 at Wadley's Funeral Chapel.  Interment will follow at Lexington Cemetery, entrusted to the care of Wadley’s Funeral Service.

Monroe was born February 7, 1951 in Henryetta, Oklahoma to Melvin Ray and Zena Ida (Davenport) Harris. He was raised and attended school in Henryetta. Monroe worked as a carpenter, and a metal fabricator for many years. On October 24, 1970, He married Doris Simmons in Henryetta, Oklahoma. They made their home in Lexington, Oklahoma. Monroe enjoyed playing chess with his son Aaron and Mike Bunch, driving, watching TV, fishing, and talking on the phone. He enjoyed to haggle and have family get togethes and cooking bar-b-que. Monroe loved being a grandpa as well as selling watermelon on the side of the road in Noble.  He is a member of the General Assembly and Church of the First Born in Purcell.

To order memorial trees or send flowers to the family in memory of Aaron Harris, Sr., please visit our flower store.