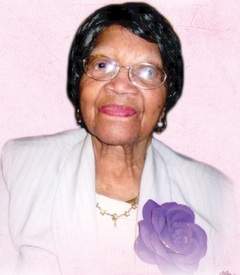 Mrs. Goff was born Alta Mae Eason to Charles and Allie Eason on February 12, 1918 in McClain County, Oklahoma. The fourth oldest of fourteen children, she spent most of her life in McClain County until widowhood, after which she moved to Missouri City, Texas, to live out the rest of her years with her son and daughter-in-law, Leonard and Opel Goff.

Growing up, Alta attended the community grade school in McClain county and completed the eighth grade, which was the highest grade offered in the community. She then attended school in Purcell for some time. On August 12, 1936, Alta Mae married the love of her life, Leonard Samuel Goff. Four children were born to this union. She worked in the home, raising her four children and instilling in them the values of hard work, faith, and family love; and as a wife she was a source of great joy to her husband, Leonard, all the years of his life. Mrs. Goff was a firm believer in Jesus Christ and belonged to the First Baptist Church while she lived in Purcell, Oklahoma. She sang in the choir, worked with the mission society, and was an active member of the community with fellow women of the church. After moving to Missouri City, Texas, she was a member of Windsor Village United Methodist Church, where she attended as long as she was physically able. She loved to sing hymns about the Lord and to share the Gospel with others.

To order memorial trees or send flowers to the family in memory of Alta Goff, please visit our flower store.