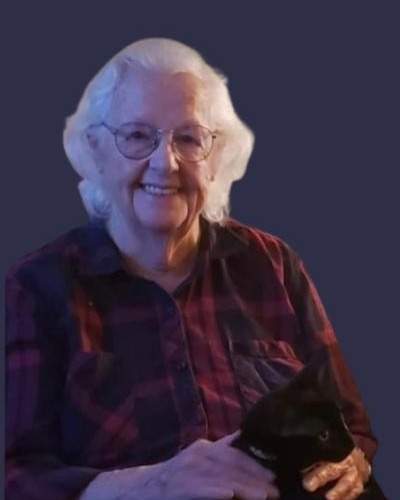 Beverly Ann Regan died August 19, 2022, in Lexington, Oklahoma at the age of 82 years 7 months 20 days.  Memorial Services are scheduled for 2:00 PM, Wednesday, September 7, 2022, at the Wadley’s Funeral Chapel, entrusted to the care of Wadley’s Funeral Service.

Beverly was born on December 30, 1939, in Hamilton, MT to Clifford and Lucy (Eggers) Dye.  She grew up in the mountains of Montana and Idaho.  Beverly treasured a time in her younger years spent living in a tent at a logging camp, riding the “Big Ditch” with her father.  She was partially raised by her grandparents, Heinrick and Gussie Eggers.  During her time with them, she found her love for God and her Country.  Beverly grew up with the love for camping and fishing.  She also loved to read, a trait that she passed on to her children and grandchildren.  In her retirement, She and John traveled to US, seeing all 48 continental states.  They frequently spent their summers in Montana with their daughter, Teresa and her children.  After years of traveling, they settled down in Wanette, OK in 2004 near John’s brother, Jack and their extended family.

Beverly is preceded in death by her parents, Clifford and Lucy Dye; her sister, Kay Thorson; and her brother, Dick Dye.  Survivors include her husband of 57 years, John Edward Regan; her daughter, Teresa Terry of Lexington; her son, Clifford Regan and wife, Diana of Williamsburg, VA; her daughter, Darla Fry and Partner, David Ryan of Great Falls, MT; her sister, Shirley Mitchell of Dallas, OR; her sister, Marge Woolridge and husband, Twerp of Dallas, OR; her 8 grandchildren; her 5 great grandchildren; and numerous other relatives and friends.

To order memorial trees or send flowers to the family in memory of Beverly Ann Regan, please visit our flower store.