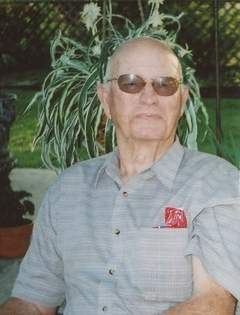 Bill Minton West died June 1, 2014 at his home in Purcell, Oklahoma at the age of 86 years 4 months 9 days. Funeral Services are scheduled for 11:00 AM, Wednesday, June 4, 2014 at the Landmark Church with Reverend Justin Blankenship officiating. Interment will follow at Hillside Cemetery under the care of Wadley’s Funeral Service.

Bill was born January 23, 1928 in Hollis, Oklahoma to Claude and Pearl (Gilmer) West. He was raised and attended school in the Hollis area. On July 23, 1947, Bill married Dorothy "Dot" Mills in Childress, Texas. They lived in the Altus area for over 50 years before moving to Purcell around 2009. Until Dot’s passing in 2013, they were married for 65 years. Bill worked as an Automobile Salesman, and loved anything that had to do with cars. He enjoyed racing, building, repairing and selling cars. Bill won many trophies drag and stock car racing over the years. Bill had a knack for telling stories, making people smile and lifting the spirit of anyone he met. In his younger years, Bill enjoyed fishing.  He was of the Pentecostal faith, and a member of Landmark Church.

To order memorial trees or send flowers to the family in memory of Bill West, please visit our flower store.