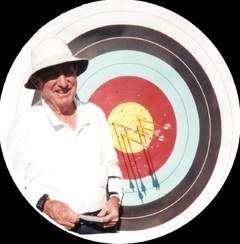 Carol Ray Northcutt died June 18, 2016 in Purcell, Oklahoma at the age of 96 years 1 month 11 days.  A private family memorial service will be held under the care of Wadley’s Funeral Service.

C.R. was the third in birth order, born May 7, 1920 to Walter Gideon and Nancy Essie Homer Northcutt, who were parents to ten children. There were six consecutive sons, followed by three sisters and a final seventh son. Growing up in a large family on a farm taught him survival skills, and honed his love of competition. The boys were rough and tumble, always vying with each other. They all wanted to succeed and excel, but none more so than C.R. He graduated from Lexington High School in 1938 and tried college, both at O.U and O.S.U. but couldn’t settle to study. After the bombing of Pearl Harbor he joined the Army as an Aviation Cadet and spent the remainder of the war instructing other young pilots and flying missions for his country.

He continued his Air Force career for 28 years as an officer and pilot. Among the many planes he flew were the P-47, the F-82 Twin Mustang, the F-89 Scorpion, the F-86 Sabre Jet and the F-102. The F-102 Delta Dagger was an interceptor aircraft built as part of the backbone of the United States Air Force's air defenses in the late 1950’s. It was the world's first supersonic all-weather jet interceptor and the first operational delta-wing aircraft used by the Air Force.

In 1960 the Air Force sent him to Alaska, land of his dreams. He loved flying there; the pristine vastness of the wilderness and plethora of wildlife he could experience thrilled him every day. An avid fisherman and hunter, he began studying and preparing to become a licensed game guide. This required many levels of rigorous testing, all of which he passed on the first try. He bought acreage 128 miles outside of Anchorage and established a hunting headquarters. He and Meg lived in a campsite alongside the runway. His clients were housed at Eureka Lodge, across the narrow two lane highway that is the Alcan, the only highway traversing Alaska. He bought two light aircraft, a Piper Super Cub and a Cessna 180. These were bush aircraft, tough workhorses that could carry men and supplies into a hunting site, and the meat and fish they procured back out. In summer one plane would be on floats for river and lake landings and the other on huge donut inflated tires capable of landing on the roughest of Tundra airstrips. In winter the floats were changed to skis for landing on frozen lakes. After retiring from the Air Force in 1968 he spent the next 15 years working as a guide. He fished for many species of salmon in the rivers and tributaries of Alaska and the small elusive and wily grayling of the inland waters. He hunted all of interior Alaska and the Bearing Sea. He guided clients for polar, brown, black and grizzly bear along with caribou, elk, moose, Dahl sheep, mountain goat and wolves. When he retired from guiding he had flown over 18,000 hours, 8,000 in the military and 10,000 as a Bush pilot.

An early conservationist he was constantly aware of the ebb and flow of native wildlife. If salmon runs were down, he cut back on fishing and urged his clients to catch and release. He quit hunting black and polar bear several years before they were proclaimed endangered and taken off the hunt list. Clean quick kills were the hallmark of his trade. if a client wounded an animal he would track it, often alone as he had the stamina and skill, until it was killed. He would then field dress the meat, saving the pelt or antlers and pack it out alone.

He married Meg Smith, also from Lexington the day he graduated from Flight School, March 20th, 1943. They were married for 64 years. Meg happily traversed Europe and North America, raising twin daughters and watching C. R. enjoy a wide range of experiences. When C.R. retired from the Air Force and began his guiding career they moved part time to Florida and built a house in the country. Meg

loved the warmth and different variety of wildlife. Their house was on an inland waterway. There were wild hogs, huge blue heron, sand cranes and alligators as neighbors. C.R. traveled to and from Alaska as hunting seasons came and went. Meg spent winters in Florida, but ventured North for the few short weeks of summer each year. In Florida she learned to fish for cobia instead of salmon and fry hush puppies to go with alligator tail. They lived in Florida for 37 years until her death in 2007.

Once retired from guiding he took up golf and renewed a love of archery. He had an archery range on their property and practiced daily. He joined a club and competed on the state level until he was state champion. That entitled him to compete on the National level in the Senior Games. He attended and won medals in six consecutive bi-annual games between 2001 and 2013. His last Gold medal was in Palo Alto, CA. in 2011.

C.R. moved back to Lexington upon Meg’s death. He bought a house with enough acreage to accommodate an archery range where he continued to practice daily. In 2015 he was able to buy the farm house he was born and raised in just North of Lexington. Again part of the property was a private archery range. He wanted the house when he first moved back to OK and had to wait six years for it to come on the market. He felt living in that home completed the circle of his life.

He is survived by five Oklahoma siblings: brothers; C.D. of Ponca City, and Walt of Edmond. Sisters; Rubye Scull of Oklahoma City, Evelyn Hull of Bixby, and Jonni Noah of Grove. Daughters;  Judy Ferris and Nancy and Paul Godfrey who live in Anacortes, WA. Numerous nieces and nephews living from New York to California remember him fondly.

As Meg did before him, his wishes were for his body to be donated to the University of Oklahoma Willed Body Program for study, teaching and research. Upon completion of those uses by the Medical School his remains will be cremated. Those remains will be interred at Arlington National Cemetery at some point in the future.

To order memorial trees or send flowers to the family in memory of Carol Northcutt, please visit our flower store.