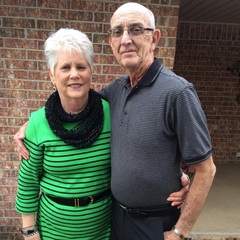 Carroll was the middle child of 5 children, born August 9, 1940 in Atwood, Oklahoma to William Joel and Essie Pearl (Desheilde) Milner. He graduated from Healdton Public School in 1958. He was inducted into the United States Army on February 4, 1961. He proudly served and honorably discharge on November 9, 1965. On March 30, 1965, he married Frances Kay McClain in Wichita Falls, Texas. Carroll was a Pastor and ministered for 43 years at 3 different churches. He was the Pastor at Country Side Freewill Baptist in Velma, Oklahoma for 17 years, at Center Freewill Baptist in Ada for 10 years, and then the Purcell Freewill Baptist for 10 years, retiring in 2013. During his ministry, he performed 78 marriages, and numerous funerals. Carroll also served as manager of the Purcell Chamber of Commerce for 12 years. He was the builder of many creations such as a 40 foot childrens train made for parades, a ½ scale 1918 Junker War Plant, which were both featured on Channel 9's "Is This A Great State Or What." He also built a replica of a mid 1900's oil derrick and found the time to restored a fully functional Herald Hauler. Carroll loved to camp and travel, and throughly enjoyed being at the trailer house Lake Texhoma, in Little Glasses resort. His wife, his 2 boys, his grandkids, and his church family were the light of his life.

Carroll is preceded in death by his parents, WJ and Essie Milner; his father and mother in law; Ray and Juhree McClain. Survivors include his wife Frances (Frannie) of the home; sons, Joel Ray Milner and wife, Darla of Purcell, William Clay Milner and wife, Tracy of Purcell; grandchildren, Paige, Jackson, Mason, Reece, Owen, Hayden; siblings, Linda Willougby and husband, Tommy, Bill Milner and wife, Jean, Ron Milner and wife, Alberta, Ken Milner and wife, Fleta; numerous nieces, nephews, and other relatives; and host of church kids that he felt so privileged to have directed to the Lord, as well as many friends.

To order memorial trees or send flowers to the family in memory of Carroll Milner, please visit our flower store.