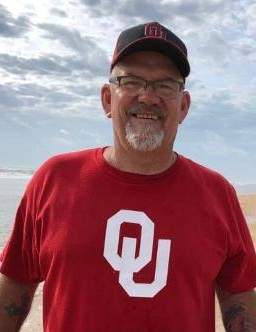 Charley was born May 19, 1964 in Norman, Oklahoma to Charley H. and Barbara Dabney.  He was raised in Mooresville, Indiana, graduating in 1982.  Charley worked many years as a plumber, for 14 years he was the water department supervisor for the town of Wayne.  After moving to Jacksonville, Florida in 2018 he continued plumbing and running gas pipeline to homes.  He was a diehard Sooner’s fan, but also liked the Dallas Cowboy’s and Cleveland Browns.  Charley enjoyed playing Santa Claus at Christmas time.  He loved going to the beach, collecting sharks teeth, and playing golf with his son and friends.  Charley enjoyed taking his son and nephew, Bryer, to Redhawks and Blazer games, or on vacation to different states to watch baseball.  Charley was a big Trump supporter, and stood firm on his beliefs.

Survivors include his son, Brandon Dabney and wife, Seirra of Midwest City; his grandchildren, Lincoln and Rhett; his mother, Barbara Sheehy of Purcell; his sister, Renae Dabney Hanner of Purcell; his niece, Ariel Hanner Trejo and husband,  Colby, and their children, Colt and Sadee of Washington; his nephew, Bryer Hanner of Wayne; and many other relatives and friends.

To order memorial trees or send flowers to the family in memory of Charley Dabney, Jr., please visit our flower store.