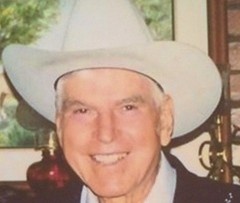 Cleatus was born February 12, 1923 in Tribbey to Ben & Lizzie (Smith) Hill. He was raised and attended school in the Tribbey/Lexington area. Cleatus honorably served in the United States Navy during World War II. On June 22, 1943, he and Stella "Jerry" Chapman were united in marriage. Cleatus worked as a truck driver, retiring from Roadway Express after 40 years of service. In 1991, he and Jerry moved to Lexington from Carthage, Texas. Cleatus loved horses, and enjoyed trail riding and trading. He started his own "Trail Riding for Christ", and always worked for the church.

To order memorial trees or send flowers to the family in memory of Cleatus Hill, please visit our flower store.