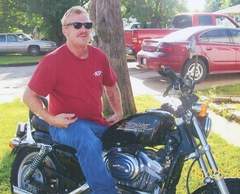 Daniel "Dano" Eugene Dungan died January 13, 2016 in Lexington at the age of 53 years 2 months 15 days. Funeral services are scheduled for 12:00 PM, Friday, January 15, 2016 at Wadley’s Funeral Chapel with interment scheduled for 3:30 PM, at the Red Oak-Bache Cemetery in Bache, Oklahoma under the care of Wadley’s Funeral Service.

Daniel was born October 29, 1962 in Salem, Indiana to Jesse Lee and Mary (Hyatt) Dungan. He graduated from McAlester High School in McAlester, Oklahoma in 1980. He was inducted into the United States Navy after graduating, proudly serving 4 years. On January 26, 2008 he married Trisha Fergason in Wayne, Oklahoma. Daniel was a carpenter and loved spending time with his friends and family. He also enjoyed hunting, fishing, camping, riding his Harley and being outdoors.

To order memorial trees or send flowers to the family in memory of Daniel "Dano" Dungan, please visit our flower store.