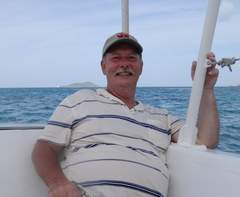 David Alan Keiser died April 7, 2016 in Norman at the age of 62 years 1 month 27 days. Funeral Services are scheduled for 11:00 AM, Tuesday, April 12, 2016 at Union Hill Baptist Church with Reverend Barry McConathy officiating. Services are under the direction of Wadley’s Funeral Service, Inc.

David was born February 11, 1954 to Bud and Mona (Wheeler) Keiser in Michigan. He was raised in Pontiac, Michigan, graduating around 1971. David was inducted into the United States Army, proudly serving 4 years, before being honorably discharged in 1975. David worked as a mechanic for Jackie Cooper Ford for a few years before going to work as a Jet Engine Mechanic for Tinker Air Force Base.  He enjoyed working on cars, spending time with his grandchildren, taking care of his dog and making people laugh. David was big kid at heart, he never met a stranger and always made a friend wherever he went.

David is preceded in death by his mother, Mona; brother, Steve Keiser; and a brother-in-law.  Survivors include his father, Bud Keiser of Michigan; son, Chad Keiser and wife, Kelsy of Purcell; grandchildren, Kassidy and Hudson, both of Purcell; a brother, Paul Keiser of Oklahoma City; 2 sisters; good friends, Nick Arden, Kendall Wahpepah, Brent Rollings, all of the Oklahoma City area, and numerous other relatives and friends.

To order memorial trees or send flowers to the family in memory of David Keiser, please visit our flower store.