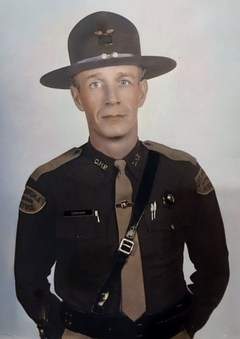 Donald was born August 15, 1931 in Susanville, California to Charles and Arvilla (Zabriski) Graham. He was raised in Susanville, graduating around 1949. He was inducted into the United States Air Force that same year, proudly serving 4 years. He was honorably discharged on November 14th, 1953. Donald married Velda Wallace in Fort Smith, Arkansas in 1952. They were married for 63 years before Velda passed last December. Donald graduated from the Oklahoma Highway Patrol academy on May 12, 1962. He served the State of Oklahoma until his retirement on June 17, 1986. Donald was a fisherman and loved to go camping. He loved traveling and spending time with Velda and his family.

To order memorial trees or send flowers to the family in memory of Donald Graham, please visit our flower store.