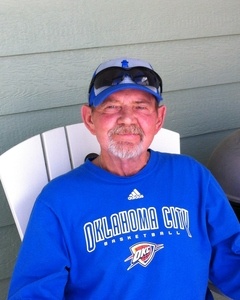 Don was born March 6, 1954 in Lexington, Oklahoma to E.C. "Billy" and Frona (Hamm) Idlett. He was raised in Lexington, graduating in 1972. Don started his career in the Oil and Gas Industry early, and at the age of 25 found himself traveling to places such as Saudi Arabia, Italy and Singapore. Also, through out his life, Don worked construction and roofing. He always had an adventurous spirit, later moving to California. In 2000 Don met the love of his life, Pat Bagley and after many years together, they were married in Las Vegas, Nevada on June 10, 2005. Don loved having fun and spending time with his family, especially his grandchildren. He was a hard worker and loved helping others. He enjoyed riding four wheelers, and water sports. Don was good at any sport he tried, and enjoyed time fishing with his grandchildren. He was a handy man and could fix anything. In 2007, he and Pat found their little slice of Heaven on earth, and Don enjoyed working on the farm. They both enjoyed traveling, and his most recent family cruise to Alaska was a highlight of his life.

To order memorial trees or send flowers to the family in memory of Elbert Idlett, please visit our flower store.