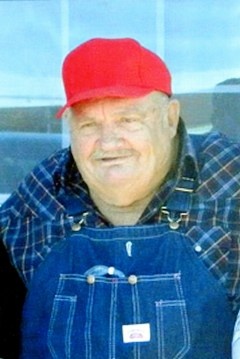 Robert was born May 11, 1935 in Dougherty, Oklahoma to Harry "Gus" and Ella Mae (Farris) Palmer. He was raised in Davis, Oklahoma. Robert worked as a machinist for many years, before retiring in 2000 from J&K Auto Parts. On August 18, 1989 he married Eva Joyce Evans in Purcell, Oklahoma. Robert enjoyed riding around in his truck with his best friend, Penny, his beloved dog. He also enjoyed breakfast at Carl’s Jr. and going to his daughters to drive the gator/rhino, and brush hogging. Robert liked to drive around in his power chair, which he called his "Little Red Car". He could always be found at Varsity, and he never met a stranger.

To order memorial trees or send flowers to the family in memory of Ernest Palmer, please visit our flower store.