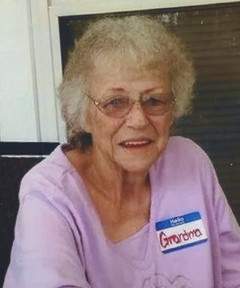 Esther Rochelle Guessford, age 77, died lovingly surrounded by family April 20, 2015 in Purcell, Oklahoma. Graveside services are scheduled for 1:00PM, Saturday, April 25, 2015 at the Hillside Cemetery. A visitation will be held from 8:00 AM to 12:00 PM, prior to services, at Wadley’s Funeral Chapel under the care of Wadley’s Funeral Service.

Esther was born July 21, 1937 in Culpeper, Virginia to George Wesley and Mittie May (Scott) Hawkins.

On July 17, 1954, Esther married the love of her life and partner for almost 61 years, Robert Lee Guessford, who stayed tenderly at her side throughout her struggle with Cancer. Together they enjoyed 6 children, 16 grandchildren, 29 great-grandchildren during a life spanning from Hagerstown, Maryland to Medina, Ohio, to finally settling to her little-bit-of heaven-on-earth in Purcell, Oklahoma with their devoted dog, Daisy Mae. She was a member of Union Hill Baptist Church.

Mother: Knowing you’re at peace next to those that you have lost in your life only slightly eases our pain of your passing. It’s lessened further by realizing that you are still with us because your lessons of love, strength, laughter, and family is a legacy that you’ve passed to your generations.

To order memorial trees or send flowers to the family in memory of Esther Guessford, please visit our flower store.