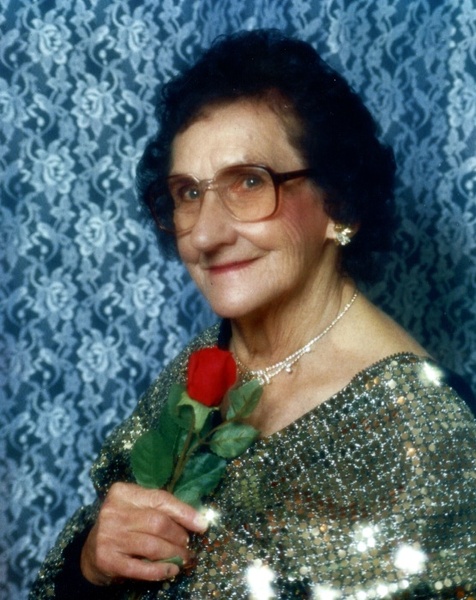 Evelyn C. Rummell died January 16, 2021 in Lexington, Oklahoma at the age of 98 years 7 months  1 day.  A private family service will be held at a later date.  Services are entrusted to the care of Wadley’s Funeral Service.
Born June 15, 1922 in Ogdensburg, New York, Evelyn was one of nine children born to Joseph and Julia (LaFrance) Montroy.  She was raised on a farm in Morristown, New York.   Evelyn worked at Glen Martin’s as a Riveter during WWII.  She met and married John Thomas  Rummell, and moved to Windsor Locks, Connecticut in 1967 and worked at Pratt & Whitney until John passed after suffering a heart attack.  Evelyn moved back to upstate New York, and enjoyed traveling to visit her children, who were scattered throughout the United States.  She was a cat lover and loved traveling with her cat, George. Evelyn eventually settled in Oklahoma and remained here with her daughter, Jeri for over 20 years.  She enjoyed shooting pool, horseshoes, and collecting coins, stamps, and John Wayne and Shirley temple memorabilia.
Evelyn is preceded in death by her husband, John T. Rummell; her parents, Joseph and Julia Montroy; and all her siblings.  She is survived by her 7 children; daughter, Imelda Venton and husband, Roger of Smithville, Tennessee; daughter, Jeretta Boren and husband, Homer of Lexington, OK; daughter, Maryanne Promisco of Texas; son, John T. Rummell of Portland, OR; son, James Rummell and wife, Sherry of Virginia; daughter, Helen Louise Miller and husband, Charles of Ocala, FL; daughter, Lorraine Kay Moss and husband, John of Bremerton, OR; 15 Grandchildren; 14 Great Grandchildren; and numerous other relatives and friends.
Evelyn was a mom, grams, aunt Evie, and best friend to all who knew her.  She will be sorely missed.

To order memorial trees or send flowers to the family in memory of Evelyn Rummell, please visit our flower store.