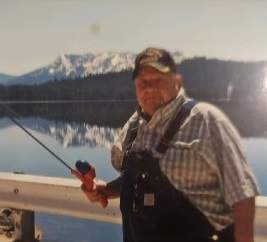 Everett was born February 20, 1934 to Austin and Mary (Bostick) Sanders in Eastern Oklahoma.  He enlisted in the Marines around 1953, proudly serving his country until his honorable discharge.  On December 23, 1958, Everett married Lois M. Bridges in Reno, Nevada.  They made their home in Kansas where Everett worked for the Winfield State Hospital, as well as in Construction.  Everett enjoyed riding his custom trike whenever he could.  He liked cooking steaks on the grill for his family, and smoking meats in his smoker.  Everett also enjoyed fishing, hunting, paddle fishing, smelting and geoducking in Washington State.  He loved spending time with his family, and tried to always be involved with his children, grandchildren and great grandchildren’s lives.  He was up for a good car race, and always had a smile on his face.

To order memorial trees or send flowers to the family in memory of Everett Sanders, please visit our flower store.