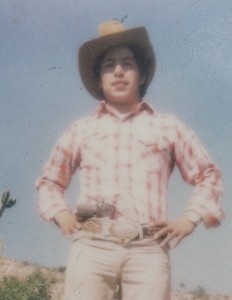 Faustino Olguin died July 30, 2020 in Oklahoma City at the age of 62 years 5 months 15 days.  Funeral Services are scheduled for 10:00 AM, Tuesday, August 4, 2020 at Wadley’s Funeral Chapel.  Interment will follow at Hillside Cemetery, entrusted to the care of Wadley’s Funeral Service.
Faustino was born February 15, 1958 in Noxthey, Tasquillo, Hidalgo, Mexico to Abelino Olguin and Catarina Resendiz.  He lived in Noxthey until he was 13 years old, when he came to the United States for the first time.  Faustino worked in west Texas and eventually moved to Altus, Oklahoma, where he married Maria Resendiz.  After the birth of their son, Daniel, they moved the family to Mexico, where Samuel, Faustino Jr., Mateo and David were born.  Faustino would come to the United States and work on ranches for part of the year, and then return to Mexico to be with his family.  In 1997, he moved his family back to the United States, working in agriculture in English, Texas, which he enjoyed.  The family later settled in Oklahoma City, where Faustino worked different jobs.  In his later years, he worked for Olguin Roofing, where he met numerous people, that will remember him as a funny, fun and strong man.  Faustino was a hard working, funny man, who enjoyed making others laugh. He also loved to eat.  Faustino worked as a preacher for a time, and helped many people come to the United States.  He taught his children many things about life, and enjoyed spending time with all of his grandchildren.  Maria, Faustino’s treasure, and Faustino were married for many happy years.
Faustino is preceded in death by his parents, Abelino Olguin and Catarina Resendiz; his brother, Abelino Olguin Jr., and his niece, Gloria Olguin Martinez. Survivors include his wife, Maria Resendiz de Olguin; sons, Daniel Olguin, Samuel Olguin and wife, Lucina Rodriguez, Faustino Olguin Jr. and wife,  Suzan Oliganga, Mateo Olguin and wife, Ashley Olguin, and David Olguin; his grandchildren, Danielita, Anai, Alfred, Samuel Isai, Emanuel Mendoza, Samuel,  Aziel,  Lizbeth, Jezzebel, Rhiauna, Adrian, Izaiah, Isaak, and Ezra; and his siblings, Amalio Olguin, Basilio Olguin, Isabel Olguin, Maura Olguin, Mariana Olguin, Bonifacio Olguin, Tomas Olguin, Filimon Olguin, Cristina Olguin, and Jorge Olguin; and many other family and friends.

To order memorial trees or send flowers to the family in memory of Faustino Olguin, please visit our flower store.