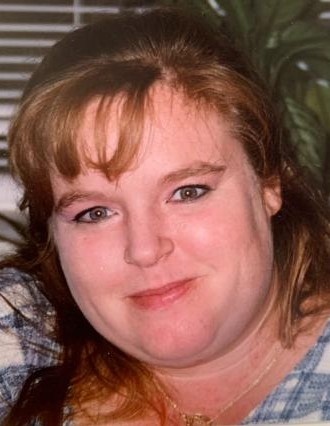 Felicia Fern (Swinney) Ellis died February 7, 2022, in Norman, Oklahoma 53 years 7 months 26 days.  Funeral Service are scheduled for 11:00 AM, Friday, 11, 2022, at the Highland Church of Christ in Tecumseh.  Interment will follow at Tribbey Cemetery, entrusted to the care of Wadley’s Funeral Service, Inc.

Felicia was born June 12, 1968, in Shawnee, Oklahoma to Hurshel Alan and Lola (Fuchs) Swinney.  She was raised in the Wanette area, graduating in 1986 form Wanette Schools.  Felicia continued her education, earning her Medical Transcription Certificate at OCCC, and was certified as a Juvenile Correctional Officer.  She worked for Carter Hall, Blue Cross & Blue Shield, and Farmhouse Café in Asher.  On June 2, 2001, Felicia married Samuel Paul Ellis in Pink, Oklahoma.  When she was a child, she dreamed of being a water well driller as she played in her daddy’s mud boxes at drill sites.  Felicia and her cheerleading group competed in the high school cheerleading Nationals in Tennessee and was known as the school’s friendly Tiger.  Friends counted on her to chauffeur a carload of them around town in her Comet, the “blue bomb”.  As a teenager, Felicia was baptized into Christ in her Uncle Bill’s farm pond and was a member of the Church of Christ.  She loved to sing and was part of her family’s hymn quartet on the way to church.  Felicia went on to win talent shows and sang at events and family gatherings.  She saw her job as a correctional officer as a way to give a helping hand to kids.  Felicia collected everything about wolves, and dearly loved animals, especially her pets at home.  She blessed people around her with her smile, humor and enjoyment of life.  We wish we had more time with her but will always treasure the time we had.

To order memorial trees or send flowers to the family in memory of Felicia Ellis, please visit our flower store.