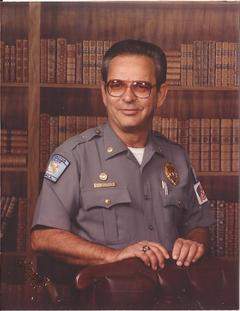 Gary D. Holloway died June 9, 2014 at Purcell Municipal Hospital after battling cancer for 9 years.  He was  69 years 5 months 29 days.  Memorial Services are scheduled for 10:00 AM, Monday, June 16, 2014 at the First Baptist Church in Lexington with Brother Rusty Canoy and Brother Dale Kirkhoff officiating, under the care of Wadley’s Funeral Service.
Gary was born December 11, 1944 in Oklahoma City, Oklahoma, the second child of Jack David Holloway and Thelma (Cooley) McKiddy.  He attended school in Lexington and joined the Army National Guard from 1962 to 1968.  Gary began his law enforcement career at the Lexington Police Department in the 1970's.  He continued his career with the Noble PD as Chief, and working at Purcell PD, McClain Co. Sheriff Dept, Lindsay PD, Elmore City PD.  Then in the 1990's Gary returned to Lexington PD, where he was Assistant Chief and DARE Officer.  Gary was selected as Oklahoma’s DARE Officer of the year in 1993.  In 1994, Gary married the love of his life, Phyllis Simpson and they made their home in Lexington.  Phyllis was also involved in teaching DARE, and both loved to spoil their grandchildren. He also joined the Cleveland County Sheriff’s Department that year, where he taught DARE to students in Lexington, Noble, Robin Hills and Little Axe.  His love was teaching his students the dangers of drugs.  He loved the DARE program and all the teachers and students he encountered.  Gary medically retired in 2006.  He was also known for his “Pop’s Doggy Daycare”, where he cared and loved his boston terriers and his grand dogs.  Gary is of the Baptist faith and a member of the Lexington First Baptist Church.
Gary is preceded in death by his parents, Jack Holloway and Thelma McKiddy; and a sister, Sallie Dumas. Survivors include his wife, Phyllis Holloway of the home; sons, Jack Holloway and wife, Judy of Wayne, Scott Holloway and wife, Angie of Pauls Valley; daughters, Jill Price and husband, Gary Don of Pauls Valley, Tammi Coker and husband, Mike of Lexington, Lori Ledgerwood and husband, Steve of Norman, Juli Braisher and husband, Tony of Oklahoma City; siblings, Shelby Holloway and wife, Norma of Oklahoma City, Laura George and husband, Greg of Purcell, Nancy Baca and husband, Lawrence of San Antonio, Texas; grandchildren, Tiffany Price, Jared Holloway, Nick Holloway, Ethan Holloway, Tyler Coker, Rissa Coker, Ryan Coker, Raegan Ledgerwood, Jake Braisher, Jennifer Braisher, Chelsea Mock (Holloway); many other relatives and friends.  Contributions may be in Gary’s name to the Stephenson’s Cancer Center at OU Medical.

To order memorial trees or send flowers to the family in memory of Gary Holloway, please visit our flower store.