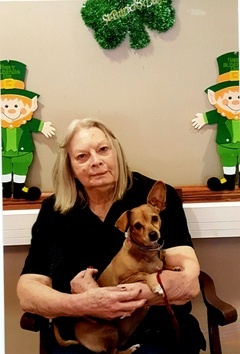 Jerre was born August 27, 1937 to Homer and Evelyn Ward Johnson in Tuscon, AZ. She was raised in Purcell and married James Idleman in 1954. Together, they had two children, Ronnie Idleman and Rhonda Tippett. Jerre spent her life caring for others and retired from Griffin Memorial Hospital, Norman, OK. Early in life, Jerre enjoyed going to rodeos and watching her kids compete. She had a lifelong affection for animals. So much so that while she was a resident at an assisted living center, she continued to feed stray animals and was eventually evicted for her caring gestures. Jerre had a green thumb. Her yard was full of vibrant colors and her garden was large enough to share her harvest with neighbors.

To order memorial trees or send flowers to the family in memory of Geraldine Johnson, please visit our flower store.