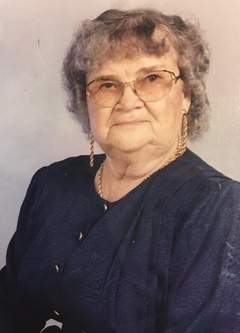 Glovetta was born July 6, 1925 in Crawford, Oklahoma to MC and Dora (Lewis) Timmons. She was raised in Russell, Oklahoma. On May 28, 1943 she married Alpha Kinsey Hightower. They were married for 32 years when Alpha passed in 1976. Glovetta worked many years as a Cashier for TG&Y, and after her retirement she was a Caregiver, and enjoyed taking care of the elderly. She loved to crochet, work crossword puzzles and read. She enjoyed cooking for family gatherings until she was unable. In recent years she enjoyed visiting her neighbors at the Ardmore Village, reminiscing about old times including pulling cotton. Glovetta was of the Baptist faith.

To order memorial trees or send flowers to the family in memory of Glovetta Hightower, please visit our flower store.