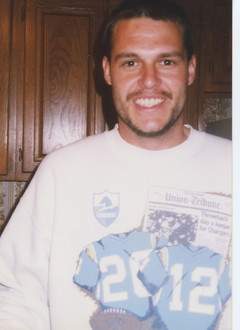 Greg was born December 1, 1970 in Norman, Oklahoma to William and Naomi Irene (Farrington) Polk. He was raised and attended school in Noble. In December 1992 he met Christina Looper and married her on December 31, 1999. Greg worked as a Journeyman Plumber for years and coached basketball, as well as being a Sunday School teacher. He enjoyed collecting football and basketball cards. Greg was an avid OU Sooners and San Diego Chargers fan. He loved playing with his grandkids and would often sneak his daughter out of school, so she could go to work with him, never letting Christina know. Greg never lost a game of Jeopardy. He could always brighten any situation, make darkness light and would never stop showing his love. Greg is a true hero to his family, and a very strong man who fought to live when he was given no chance. He will be forever an amazing role model. Greg was a son, brother, nephew, cousin, uncle but most of all, an amazing father, husband and grandpa.

Memorial Contributions may be made at www.gofundme.com/v78r2tp2t .

To order memorial trees or send flowers to the family in memory of Gregory Polk, please visit our flower store.