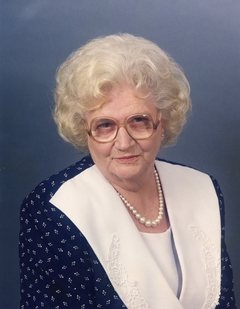 Helen Ruth Green died February 16, 2017 in McAlester, Oklahoma at the age of 90 years 4 months 7 days. Funeral services are scheduled for 11:00 AM, Tuesday, February 21, 2017 at Chaney Harkins Funeral Chapel in McAlester with interment to follow at Arpelar Cemetery, entrusted to the care of Wadley’s Funeral Service of Purcell, Oklahoma.

Helen was born October 9, 1926 in Lequire, Oklahoma to James Henry and Zora Leola (Bray) Wadley. She was raised in the Talihina area. Helen attended school in Talihina. On June 30, 1947, she married Elmer E. Green in Mena, Arkansas. They made their home in McAlester in 1954, where they raised their family. Helen loved cooking, gardening, reading her Bible and watching her shows on TV. Helen was a strong role model, caring, loving and feisty, but above all else, Helen loved spending time with her family, especially her grandchildren and great grandchildren. She was of the Baptist faith, and a member of Hillcrest Baptist Church.

To order memorial trees or send flowers to the family in memory of Helen Green, please visit our flower store.