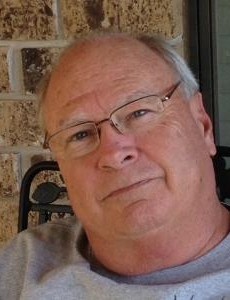 
Howard Glen Turner died April 7, 2021 in Purcell at the age of 66 years 1 month 12 days.  Funeral Services are scheduled for 10:00 AM, Saturday, April 10, 2021 at the Wadley’s Funeral Chapel.  Interment will follow at Hillside Cemetery, entrusted to the care of Wadley’s Funeral Service.
Glen was born February 26, 1955 in Denver City, Texas to Howard and Marlene (Sanders) Turner.  He was raised in Lexington, graduating in 1973.  In 1974, Glen and Linda Gayle Harper were united in marriage in Lexington.  In 1978, Glen and Linda got a wild hair and moved to Anchorage, Alaska, where they had their first son, Kyle.  In 1983, Glen got a promotion and moved the family to Seattle.  Shortly after, they decided to return home to Oklahoma to raise the family, welcoming another son, Kevin in 1986.  Glen was a ham radio operator, taking up the hobby at 16 years of age.  He enjoyed domestic and beach vacations, often traveling to ham radio events.  Glen attended conventions, participated in competitions, and won many awards.  He enjoyed talking through the radio to people on the International Space Station or seeing how many countries he could communicate with in a day.  Glen could often be heard singing or whistling, especially country music, especially Carrie Underwood.  He took voice lessons as a child and was vocally talented.  After retirement, Glen took up woodworking.  He became an excellent wood turner and furniture maker.  Glen made his family and friends quality Adirondack chairs, cabinets, tables, pens and candle holders, wowing all with his artistic abilities and attention to detail.
Glen loved to laugh.  He was a prankster and loved to keep people on their toes.  When his boys were little, he would shine a flashlight under his face, scarring them through the window while they watched X-Files.  One son has carried on the scarring legacy.  Glen also had a habit of blowing an air horn while people minded their own business.  And it was not wise to fall asleep on road-trips.  Glen would immediately sense that someone was dozing, them slam on the brakes and scream.  The poor sleeper would wake up startled with their life flashing before their half-asleep eyes.  Glen could put on a tough exterior, but deep down, he was a soft hearted man, who loved animals.  Glen and Linda owned several Cattle, most of which were named and became pets.  He communicated with his cattle and chickens in a language that only he and the animals understood.  Glen also loved his cats, and occasionally fed neighbor owned felines, until they finally came to live with him.  A pet in the Turner house was a well-loved creature.
More than animals, Glen loved people.  He could talk to anyone about anything, making friends with people from all walks of life.  Glen loved helping people, and volunteered to chainsaw fallen trees at his son’s house after a massive storm.  He loved mowing the yard at his sister in laws, or sharing Linda’s garden veggies with neighbors.  As an investigator and drug court administrator, Glen helped people find the truth and get sober, roles that had life-changing effects for so many people.  More than anything, Glen loved his family, and was so proud and thankful for his wife of 46 years, Linda.  His beloved brother Gregg was one of his favorite people.  And he wanted nothing more than to visit with his sons and their families, helping, singing, joking and loving.
Glen is preceded in death by his father, Howard Turner; his mother, Marlene Green; his stepfather, Dean Green; his sister, Gayla Hurley; and his niece, Holly Vaughn.  Survivors include his wife, Linda; his sons, Kyle Turner and Jordan, Kevin Turner and Tara; his brother, Gregg Turner and Suzanne; his sister-in-law, Vickey Vaughn; his grandchildren, Holden Turner, Emerson Turner; his nieces, Melanie Blankenship and Jerry, Leslie Nemeth and Michael; his nephews, Jared Vaughn, Rusty Turner, Cory Little Bird and Chris Davis and Marci; and numerous other relatives and friends.

To order memorial trees or send flowers to the family in memory of Howard Glen Turner, please visit our flower store.