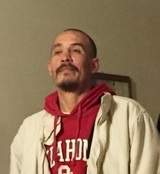 Jason was born on December 15, 1973 in Oklahoma City to Danni Ragland and Johnny Harjo. He was raised in Midwest City. Jason was a handyman, helping when and where he could. He enjoyed hanging out with his friends, as well as watching movies.

To order memorial trees or send flowers to the family in memory of Jason Harjo, please visit our flower store.