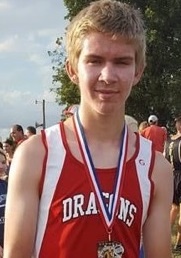 Jay Patrick (JayRay) Taylor departed this life on May 10, 2020 at the age of 20 years 8 months 21 days.  Private family services are scheduled for a later date, entrusted to the care of Wadley’s Funeral Service.
Jay was born August 20, 1999 in Norman, Oklahoma.  He was raised by his grandmother, Patricia Felder, until July 5th, 2013 when he came to live with, and then adopted by the Taylor family.  Jay was active in and excelled at Cross Country during high school.  He enjoyed camping and taking vacations with his family, especially cruises. Jay enjoyed competing, and possessed a high desire to win, no matter what the event.  He could turn just about anything into a competition.  Jay took great pride in his appearance, always fixing his hair, making sure it was “just right”.  He was very picky about his clothes, always wanting to be in style.
Jay is preceded in death by his grandmother, Patricia Felder; his “Poppa”, Rick Taylor.  He is survived by his parents, Dusty and Lacy Taylor; his 5 younger siblings, Landon, Layken, Lyrick, Quinn and Hudson Taylor; his Gram, Karen Taylor of Chandler, OK; his aunts, Amanda Taylor of Chandler, OK, and Amber Idlett and her husband, John of Washington, OK; his uncle, Derek Meyers of New Jersey; several cousins and a host of adoptive family and friends who will miss him greatly.

To order memorial trees or send flowers to the family in memory of Jay (JayRay) Taylor, please visit our flower store.