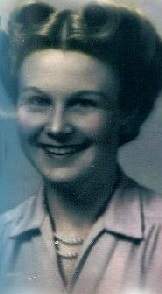 Jean was born to Griffith Alexander and Helen Grace (Seece) Miller on July 19, 1920 in Los Angeles, California. She was raised in Los Angeles, graduating around 1937. After graduating, and while attending Los Angeles College, Jean embarked on a career as an Executive Secretary. She married Robert Allyn Walker, Jr. On September 5th, 1941. They made their home in Alhambra, California, later moving to San Diego. Robert died in 1973. Jean moved to Purcell in 1997 to be with her daughters. She his best known for her captivating smile and endearing laugh. Jean enjoyed sewing, crocheting, knitting, cooking and going to the beach.

Jean is preceded in death by her parents, Griffith and Helen Miller; and husband, Robert Allyn Walker, Jr. Survivors include her daughters, Debi Smith and Dorene Roed, both of Purcell.

To order memorial trees or send flowers to the family in memory of Jean Walker, please visit our flower store.