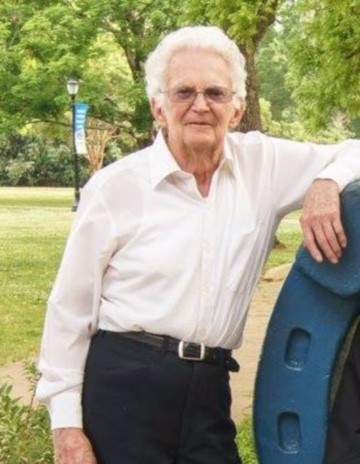 JJ was born May 9, 1928 in Elizabeth, Arkansas to Brown and Nora (Shelton) Ware. He was raised and attended school in Elizabeth. On June 27, 1946, JJ married Cleo Ferne Argo in Anadarko, Oklahoma. They moved to Purcell in 1965, and were married 65 years before Ferne died in 2011. JJ worked as a surveyor for many years. After he retired, he drove the Senior Citizens Bus for years. He played guitar in the band and attended the Senior Citizens events until he was placed in the Noble Healthcare Center. JJ loved his children, grandchildren and great grandchildren, and tried to make it to all his grandchildren’s activities and functions. He enjoyed walking and watching old western movies.

JJ is preceded in death by his parents, Brown and Nora Ware; spouse, Ferne Ware; and all of his siblings. Survivors include his daughter, Judy Ware of Lexington; granddaughter, Dr. Miranda Seal and husband, Terrance of Noble; great grandchildren, Collin Olson, Cedrik Seal, Chelle Seal and Caelee Seal and many other relatives and friends.

To order memorial trees or send flowers to the family in memory of Jehoiada "JJ" Ware, please visit our flower store.