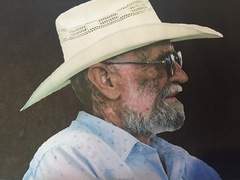 Jimmy Eldred Stamper died April 20, 2016 in Wanette, Oklahoma at the age of 73 years 8 months 18 days. A private family memorial service is scheduled for a later date.

Jimmy was born August 2, 1942 in Canton, Texas to John Eldred and Bonnie Louise (Lane) Stamper. He was raised and attended school in Canton, Texas. On July 25, 1960, Jimmy was inducted into the United States Navy, proudly serving until his honorable discharge on November 21, 1963. In August 1971, he married Judy Burns, they were married for 27 years before Judy’s death in 1998. Jimmy worked most of his life as a sprinkler fitter. He has been a member to the Road Sprinkler Fitters Union 669 since 1971. Jimmy was a hard worker and enjoyed taking care of his family. In his later years, he enjoyed Cattle Ranching.

To order memorial trees or send flowers to the family in memory of Jimmy Stamper, please visit our flower store.