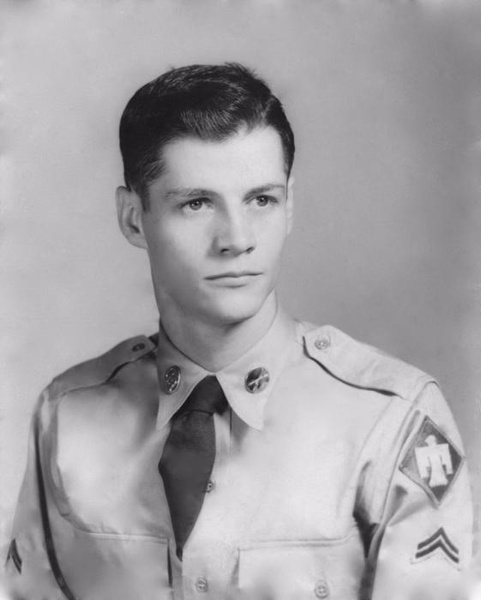 John Robert Segress of Asher, OK, formerly of Yukon, OK, passed away on December 1, 2018. A private family memorial will be held at later date. Services entrusted to the care of Wadley’s Funeral Service of Purcell, OK.

John was born in Union City on October 1, 1932 to Roy and Edith Segress, the eldest of eight children. He joined the Army National Guard on September 1, 1950. Shortly thereafter, he was deployed to Korea with the 45th Infantry Division. John served his country with the Oklahoma National Guard for forty-two years. He retired from the military with the rank of Chief Warrant Officer 4. After returning from Korea, John met the love of his life, Glenda Cox. They were married in Oklahoma City on July 1, 1955. The highest priority in John’s life was his faith and his family. He was a loving husband, father, grandfather, brother, and uncle. John was adored by his grandchildren. They held a special place in his heart, each believing they were his favorite.

His wife of sixty-three years, Glenda; his daughters and their husbands, Cynthia and Steve Merrifield, and Linda and Darren Bond will lovingly remember him. He will also be greatly missed by his grandchildren Elizabeth Latta (Tyler), Rebecca Leach (Landry), Jacob Bond (Becca), William Bond (Peyton), Matthew Merrifield, and Cody Bond. He deeply loved his great grandchildren, Luke Latta, Amelia and Jackson Bond, and Poppy Leach. John’s siblings were very important to him, Charlie Segress, Dick Segress, Mike Segress, and Sylvadell Johnson. He will also be missed by family and special friends Georgia and Melvin Jones, Joshua, Caity, and Stevie Scarber, as well as numerous nieces and nephews.

To order memorial trees or send flowers to the family in memory of John Segress, please visit our flower store.