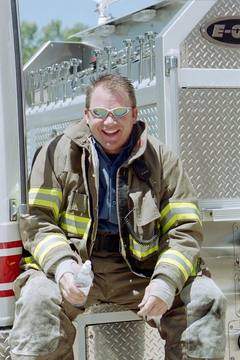 Joseph Edward Heck was stamped "return to sender" on August 17, 2016 in Purcell, Oklahoma at the age of 44 years 1 month 13 days. We think he left so soon to avoid this years black Friday Christmas sales.

Joe was born July 4, 1972 in Salem, Missouri to Thomas E. and Maryann (Lang) Heck. He was raised and attended school in Lexington, Oklahoma. On July 5, 1990, Joe was inducted into the United States Marines. After serving 4 years, Joe decided that being bossed around wasn’t for him. During that time he earned the Sharpshooter Rifle Badge, Marksman Pistol Badge, National Defense Service Medal, Sea Service Deployment Ribbon, Good Conduct Medal, Navy Achievement Medal, Humanitarian Service Ribbon, and a Letter of Appreciation, for various honorable acts including participating in Hurricane Andrew Relief, and many different military operations. Upon his return to civilian life, Joe began his work as a firefighter, without realizing that he was still under the all watchful eye of the powers that be. Joe continued his education in EMS and went to EMT school. His instructor was a Paramedic named Kathleen Haworth. Joe tried all the tricks in his arsenal to get noticed by his instructor, relying on his arrogance and quick wit. Low and behold, on July 7, 2006, Kathleen gave into Joe’s persistence and determination on making her the happiest darn woman on earth, and said "yes, now leave me alone." They loved spending time with family and friends, going on trips and making great memories. Joe was a jokester and prankster. He never met a stranger, and was always helping others. He enjoyed riding motorcycles and deer. Of course he hadn’t perfected the transition from bike to deer, but he was adventurous. Joe was told many times, "running away from fires makes more sense than running towards them," so Joe retired due to his health. Joe reflected on his service and often stated "what a great bunch of brain damaged misfits that I have worked with, except the fab five and their minions." It was later learned that Joe didn’t like them anyway.

Joe’s visitation is scheduled from 8am to 8pm, Thursday and Friday. 8am to 5pm on Saturday. Joe’s Funeral Services are scheduled for 2:00 PM, Monday, August 22, 2016 at the First Baptist Church in Purcell with Reverend Justin Blankenship officiating. Interment will follow at Hillside Cemetery under the care of Wadley’s Funeral Service.

While Wadley’s Funeral Service strives to make the information in obituaries as personal and accurate as possible, we make no claims, promises, or guarantees about the accuracy, completeness or similarities in wording of this obituary.

To order memorial trees or send flowers to the family in memory of Joseph Heck, please visit our flower store.