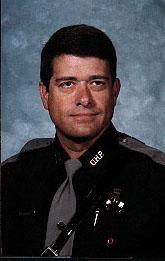 Kevin Eugene Wiginton entered heaven on July 22, 2016, after a lengthy battle with cancer, at the age of 59 years 2 months 17 days. Kevin died peacefully, in his home, in the arms of his wife of 17 years, Michelle Heck-Wiginton, of Rolla, Missouri. His sons proudly celebrate their dad’s heavenly homecoming, after tenderly and lovingly helping to care for him while he was fighting cancer.

A family visitation will be held from 6:00 PM to 8:00 PM, Thursday, July 28, 2016 at Lighthouse Worship Center in Purcell. Memorial Services are scheduled for 2:00 PM, Friday, July 29, 2016 at Bethel Baptist Church in Norman under the care of Wadley’s Funeral Service.

Kevin was born May 5, 1957 in Fort Worth, Texas to Travis and La Moyne Wiginton. He knew from an early age that he wanted to become an Oklahoma State Trooper, after being inspired by OHP officers at Falls Creek Baptist Church Camp. He was a cadet in the OHP’s first Cadet Lawman Academy, one of the very first OHP Courtesy Patrolmen "Baby Bears," and was the first Cadet Lawman Academy cadet to become a Trooper. Kevin served the State of Oklahoma from June 14, 1978 to June 30, 2007. He worked 2,027 accidents, 30 of which included one or more fatalities, and he was hit bodily or in his unit 13 times. Kevin attended OU and served as the manager for the men's basketball team. He was a gifted drummer who played in the drum corps at Choctaw High School. Kevin’s selfless service spanned 30 years, but his love and care of his family and friends lasted a lifetime.

Kevin was preceded in death by his mother, La Moyne Wiginton, and his younger brother, Kyle Wiginton. He is survived by his wife, Michelle Heck Wiginton of the home; sons, Jeremiah Wiginton (28), of Noble, Oklahoma, Halston Heck (27) and his fiancée, Adrianna Johnson, of Rolla, Missouri, and James (25) and Bethany Wiginton, of Tulsa, Oklahoma; father, Pastor Travis Wiginton; brother, Craig Wiginton and wife, Joanna, and Craig’s stepdaughter, Meg Brady; sister, Kristin Wiginton and her partner Sue Anderson; sister-in-law, Darr Wiginton, and niece Hailey Wiginton and nephew Travis Wiginton; and many aunts, uncles and cousins.

In lieu of flowers, a donation to help with Kevin's overwhelming medical expenses would be greatly appreciated: https://www.gofundme.com/kevinwiginton. If you do prefer to send flowers, please request live ones that can be replanted in a memorial garden at the Wiginton home.

To order memorial trees or send flowers to the family in memory of Kevin Wiginton, please visit our flower store.