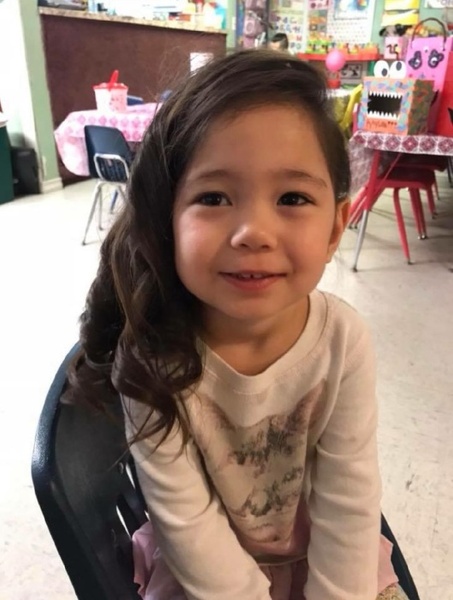 Our little Angel, Kira Su Dobbs died September 1, 2018 in Oklahoma City, Oklahoma at the age of 3 years 2 months 28 days. A visitation is scheduled from 1PM to 5PM on Wednesday, September 5, 2018 at Wadley's Funeral Chapel, entrusted to the care of Wadley's Funeral Home.

Kira was born June 4, 2015 at Balboa Naval Hospital, San Diego to Jay and Ping He Dobbs. Jay was born and raised in Noble, OK, graduating from Noble High School in 1985 and immediately joined the U.S. Navy. He met his wife Ping He, born in Sheyang, China, while deployed to U.A.E. in 2010 and they were married in 2012 in China. Upon his retirement in 2016 they returned to Oklahoma where they built a home and settled in Purcell.

Our Angel loved all the new experiences and adventures that arose in our life. Kira was a world traveler and loved to fly. She was excited to be going to the big girl school, Delta Early Head Start and taking a back pack, riding her bike, playing doctor with her medical kit, and driving her car among other things. Kira enjoyed going to her YaYa's house to play and be spoiled by her Aunt Kim Dobbs. Most of all she loved to sit with her parents and watch children's youtube videos on their phone.

She is preceded in death by her maternal grandfather, Cheng You He, paternal great grandparents Darst and Ruth Yeary and Aunt Rhonda Dobbs.

She is survived by her Father Jay Dobbs and mother Ping He of the home; a brother, Jin Yang Gou of Sheyang, China; her grandparents, Gerald and Betty Lucas of Hagerman, Idaho; her Uncle, An He of Sheyang, China; her Aunt's and Uncle's Candy Dobbs of Henderson, NV; Kim Dobbs and Catalino Hernandez of Purcell, OK and Tonya & Cesar Rivera of Heavener, OK; and numerous cousins.

To order memorial trees or send flowers to the family in memory of Kira Dobbs, please visit our flower store.