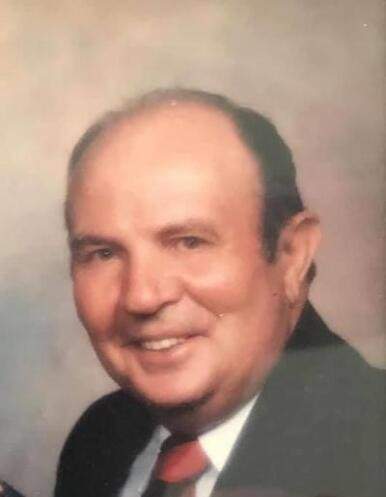 L.C. Bingham, Jr. died June 27, 2020 in Lexington, Oklahoma at the age of 95 years 1 month 8 days.  Graveside service are scheduled for 10:00 AM, Friday, July 3, 2020 at Hillside Cemetery, entrusted to the care of Wadley’s Funeral Service.
L.C. was born May 19, 1925 in Asher, Oklahoma to Leonard Charles and Fannie Cordelia (Thomas) Bingham.  He was raised just north of Washington, Oklahoma on a farm, where he raised and showed pigs, winning prizes at county fairs.  While in school, L.C. helped work the farm with his mother and father until he enlisted in the United States Army.  During World War II, he served as an infantry soldier.  L.C. was wounded, but chose to remain in the Army.  During Korea, L.C. served  as a medic and supply for a mash unit.  During the Vietnam era, L.C. was active duty state side.  He retired from the Army as a Master Sargent,  after serving our country for 20 years.   L.C. was a member of the Church of Christ in Wayne, Oklahoma,  for 50 plus years. He served as a Deacon, and Elder in charge of Vacation Bible School for many years.  He taught bible classes, and even preached a few times.  L.C. lead beautiful prayers, but he was best known for his Song Leader abilities. He taught many young men how to lead singing during worship services, and taught classes on how to read and sing songs with Shape Notes.  Being a dynamic Song Leader, L.C. was requested to lead singing for Gospel Meetings through-out rural Oklahoma.  He is responsible for starting the 2nd Sunday Singings, which continue still,  some 55 years later.  L.C. married Ardia Faye (Bounds) on June 8, 1952. They were married 64 years before she passed in 2016.  He and Faye had two children, Rick Bingham and Ladonna Faye Bingham.
L.C. is preceded in death by his mother and father, his wife “Faye”, and his sister, Georgia Smith. Survivors include his son, Rick Bingham and wife, Stephanie; daughter, Ladonna Bingham;  grandchildren, Jared Bingham and wife,  Michelle,  Peggy Boyer and husband,  Eric,  Jennifer Vancil and husband,  Kenny, Chad Wallace and wife, Kirsty, Scott Wallace and wife,  Ashlei, Rachel Brinlee and husband,  Gregg;  great-grandchildren, Daphne Bingham, Hypatia Bingham, Toby Bingham, Ananais Bingham, Eleanor Bingham, Andrew Vancil, Tyler Vancil, Brooklyn Vancil, Kennedy Wallace, Claire Wallace, Hayley Wallace, Lucas Wallace, Collin Wallace, Harlie Faye Brinlee and Nate Ponce’,  and Hunter Brinlee; a special niece, Nancy (Pile) Laney, and  special nephew, Bill Pile.
In lieu of flowers, the family has asked that memorial contributions be made to either of L.C.’s favorite charities, or a charity of your choice.  His favorites include the West View Boys Home, Box 553, Hollis, OK 73550 or Guide Dogs for the Blind, 350 Los Ranchitos Road, San Rafael, CA 97903.  As a family, we want to express our appreciation and gratitude to Rick Horton and his staff of the Lexington Nursing Home.  To quote L.C., “If you can’t be at home, this is the best place to be.”

To order memorial trees or send flowers to the family in memory of L. Bingham, please visit our flower store.