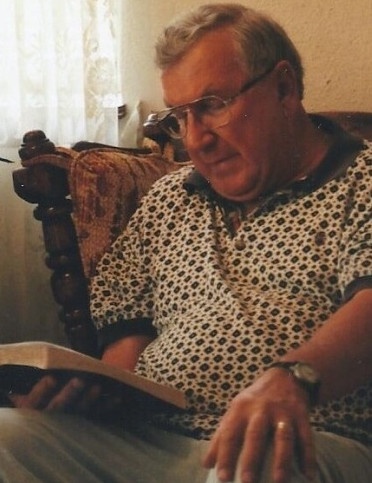 Leo Leonard Witzke passed peacefully, without fear or pain, July 15, 2022, at his home in Purcell, with his wife by his side, at the age of 86 years 3 months 23 days.  Memorial Services are scheduled for 1:00 PM, Wednesday, July 20, 2022, at Landmark Church, entrusted to the care of Wadley’s Funeral Service.

Leo blew into this world on March 23, 1936, in the middle of a giant dust storm.  He was born, at home in Bessie, Oklahoma, to Leonard and Miriam (Kiehn) Witzke.  He was the fifth of what would ultimately be six children in the family.  When Leo was about four years old, the family moved to Turpin, Oklahoma, where Leo attended school.  He was the starting center on Turpin’s first ever (6 man) football team.  He was a member of the State Runner-Up Turpin High School Basketball team.  Following graduation from Turpin High School in 1954, he attended a semester at SWOSU in Weatherford.  On August 27, 1955, Leo married Isabel Neese.  Since he was not yet “of age”, his mother had to stand up for him, a fact that Isabel never let him live down.  Leo was inducted into the United States Army, where he was trained as a Chemical Weapons Specialist.  He spent time in Utah, New Mexico, and Germany.  His security clearance prevented him from ever telling too many stories, although he let tales slip of accidentally gassing herds of goats at White Sands Missile Range during missile tests.  Also, his bare skin corroded metal watch bands, and his body stopped watches, his whole life. After his honorable discharge, he soon became employed by the United States Postal Service.  Leo was a letter carrier in Liberal, KS for thirty-four years, and carried mail in all parts of town, almost exclusively on foot, walking 15 miles a day, carrying a 50 lb. mail bag.  He was universally loved and respected by his patrons, no matter what “side” of town he served.  Leo was always sure to check in on his elderly patrons; shared coffee or a cool drink and conversation; always carried extra stamps for the shut in’s; would go on his “off” days to check for packages or letters his patrons were expecting; and was rumored to punt overly aggressive ankle biting dogs across the yard, when the need arose. In the early days of his Postal Service career, Leo also worked at least one, usually two, part-time jobs to support his family; but he always found time to be a little league coach.  After the passing of Isabel in December 1969, he met Patricia Ann (Newby) Barbee.  Following a 28-day whirlwind long-distance romance, Leo and Patricia married on June 12, 1970.  A family of seven souls was instantly born. The family ultimately moved to a twenty-five-acre spread outside of Liberal.  Leo proudly watched all his children grow up and pursue their own lives and interests.  He and Patricia adamantly supported whatever activities, sports or other adventures in which his children participated.  In 1991, Leo retired from the Post Office, at the same time Patricia graduated from Nursing School with her RN Degree.  They moved to Purcell, where Leo began a career as part-time grocery sacker at United Food Store, and full-time gentleman golfer.  He and Patricia faithfully attended churches in the Purcell area; with Landmark Church in Purcell being their church home for the past many years. Leo was a man of deep and devout faith; but he practiced that faith quietly and without fanfare.  He had a deep place in his heart for those who were down on their luck, or who needed help.  Leo took to heart Christ’s admonition: “Truly, I say to you, as you did it to one of the least of these my brothers, you did it to me.”  He was forever picking up hitch-hikers; feeding, giving drink, and giving rides to those he found walking down the street; stopped to help stranded motorists; stopped to help people sitting by the side of the street or in the park who just “looked like” they were in distress; worked in food pantries; took meals to people living under bridges in OKC; quietly provided Christmas presents and meals to families who had none; and helped persons or families in the community as he could.  Leo never asked if anyone was “legal”; did not ask their politics, lifestyle or religion; did not judge them by their skin color or clothing.  He asked the simple, but singularly most important question one human being can ever ask another: “How may I serve you?”.  Leo did not talk about it, did not brag about it, and never expected anything in return.  Only God, Leo, and those he helped truly know how many souls he touched throughout his life.  He simply fulfilled his mission to love, respect, and treat with dignity, EVERY human being.  He had faith that all else would sort itself out. Leo lived a full, rich life.  He bowled a perfect 300 game and hit numerous holes-in-one in golf.  Leo and Patricia camped often, and he chased golfers all around Oak Tree Golf Course at a PGA event, seeking autographs like a kid at a rock concert.  Leo was always game to be, or do, silly things at family gatherings and church.  He fiercely loved each and every one of his children, their spouses, his grandchildren, and his great grandchildren.  Leo prayed for each, by name, every night before he closed his eyes in sleep.  Strangers were just friends he had not yet met.

Leo is preceded in death by his first wife, Isabel Witzke; his parents, Leonard and Miriam Witzke; his younger brother, Dale Witzke, who died in infancy; his brother, Benjamin Witzke; and his sisters, Norma Jarrett, and Lavonna Gaylord.  Survivors include his wife of 52 years, Patricia Witzke; his son, Randy and wife Suzanne; his daughter, Gina and husband Randall; his son, George; his son, William and wife Robin; his son, Phillip and wife Denise; and by a soul who was very kind, helping and special to him, and who has been like a fifth son to him, Marlon Smith.  Leo is also survived by sixteen grandchildren, five great-grandchildren; his brother, Donald and wife Sharon; a host of relatives, nieces and nephews on the “Witzke”, “Newby” and “Neese” sides of his extended family; and countless friends.

To order memorial trees or send flowers to the family in memory of Leo Witzke, please visit our flower store.