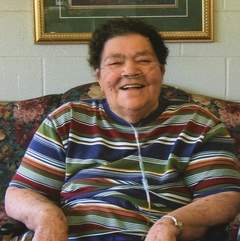 Lilly was born November 24, 1933 in Purcell, Oklahoma to Joe and Felistika (Auld) Troutman. She was raised and attended school in Purcell. Lilly married Raymond Morrison around 1952. They were married for 57 years until Raymond’s passing in 2009. Lilly worked as a Certified Medication Aide for many years in Long Term Care. She loved fishing, playing board and other games such as Yahtzee, Farkle and Dominos. In her earlier years she enjoyed crocheting. She also enjoyed talking on the phone, and was an avid OU and Dallas Cowboy’s fan.

Lilly is preceded in death by her parents, Joe and Faye Troutman; husband, Raymond Morrison; children, Mitchell Ray who passed in the 1960's, Johnny Paul who passed in the 1970's, and an infant child that passed at birth; siblings, Ruth Logan and Jake Langford. Survivors include her sons, Tommy Morrison and wife, Tammy of Noble, Raymond Dee Morrison and wife, Kim of Milburn, daughter, Joann Steudeman of Arkansas; 2 grandsons she raised, Tommy Morrison and Raymond Morrison, III; 13 grandchildren; 15 great grandchildren; brother, John "JB" Troutman and wife, Marge of Mustang and many other relatives and friends.

To order memorial trees or send flowers to the family in memory of Lilly Morrison, please visit our flower store.