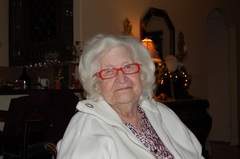 Marguerite Pearl Beller died June 23, 2014 in McKinney, Texas at the age of 92 years 6 months 3 days. Gravesite services are scheduled for 1:00 PM, Wednesday, June 25, 2014 at Washington Cemetery under the care of Wadley’s Funeral Service.

Marguerite was born December 20, 1921 in Walters, Oklahoma to Clarence Von and Harriet Adeline (Krisher) Payne. She was raised and attended school in Walters. Marguerite went on to Business School in Oklahoma City. During the war, Marguerite worked on airplanes, then later worked in Civil Service for many years. In February 1971, she married Paul Beller in Gainsville, Texas. Marguerite enjoyed crocheting and drawing. Later in life she loved camping, fish fry’s, and listening to music. Marguerite was of the Baptist faith and a member of 1st Baptist Church in Oklahoma City.

To order memorial trees or send flowers to the family in memory of Marguerite Beller, please visit our flower store.