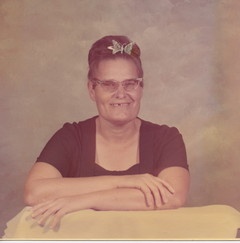 Mary Luceal Simmons Skinner joined her Lord in Heaven on May 18, 2014 in Lexington, Oklahoma at the age of 79 years 4 months 22 days. Funeral Services are scheduled for 10:00 AM, Wednesday, May 21, 2014 at the General Assembly and Church of the First Born in Purcell. Interment is scheduled for 3:30 PM, Wednesday, May 21, 2014 at Westlawn Cemetery in Henryetta, Oklahoma under the care of Wadley’s Funeral Service of Purcell.

Luceal was born December 27, 1934 in Oklahoma City, Oklahoma to Clarence and Myrtle (Burse) Wilkinson. She was the fifth of ten children. Luceal began her walk with Christ in 1946 at the General Assembly and Church of the Firstborn in DeWitt, Arkansas. Luceal attended the Forest Grove School in DeWitt, Arkansas. She married Earl Simmons on January 31, 1953 in Miami, Arizona and had nine children. Luceal loved painting in her younger years. She loved working in her garden, canning jelly’s, pickles and lots of vegetables. Luceal enjoyed spending time with her family and traveling with her children.

To order memorial trees or send flowers to the family in memory of Mary Skinner, please visit our flower store.