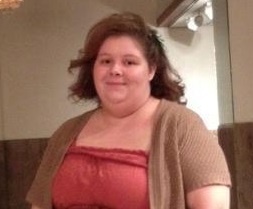 Megan Nichole Hill departed this life January 21, 2021,  at Integris Baptist Hospital, due to complications of Congestive Heart Failure, at the age of 31 years 5 months 30 days.  Memorial services are scheduled for 2:00 PM, Thursday, January 28, 2021 at the Sulphur Church of Christ, entrusted to the care of Wadley’s Funeral Service.


Megan was born July 22, 1989 in Ada, Oklahoma to James and Michelle (VanVranken) Hill.  She  graduated high school in 2007 from Malcolm High School, and was Valedictorian of her class in Sault Ste. Marie, Michigan.  Megan won an award for Outstanding Native American, was a member of Student Council and Trible Youth Council.  She also coached special Olympics for the Intellectually Disabled Clients that she worked  with at Opportunity Center in Ponca City, OK.  Megan worked in retail most of her life, and her last job was with Shoe Department in Purcell, OK.  She had a passion for shoes so this job was ideal for her.  Megan became a foster parent in 2013, and fostered her four cousins and some more kids before having to have surgery for ovarian cancer.  In May  2015 she became a foster parent again to Destiny and Chasity, then to Lissianna after she was born in February  2016.  Megan adopted Destiny, Chasity and Lissianna on October 6, 2017.  She was a people person, and rarely had anything bad to say about anyone.  Megan was loved by many and touched many hearts.

Memorials may be made to Integris Baptist Hospital in Okla. City, OK to the Cardiac Transplant Program and LVAD Program.  The family would like to thank the amazing Transplant Team at Integris Baptist Hospital.  This team  gave us three more years with Megan.  We also want to thank the amazing Nursing Staff on the 8th floor.  All theses people, the Doctors, Nurses and other hospital staff, and other LVAD patients became family to us.  Also to the  Lexington Elementary School Staff, especially Kathy Keeler, for all they have done.  And lastly, thank you to the many many people who have helped and supported us through the last 3 years in Megan’s time of need.  Megan is the only known survivor from being on ECMO two times and is a survivor of having Covid 19 twice.  The Kids will remain in the home with Grandmother Michelle. Megan and Michelle had joint custody of them
after Megan became ill.

To order memorial trees or send flowers to the family in memory of Megan Hill, please visit our flower store.