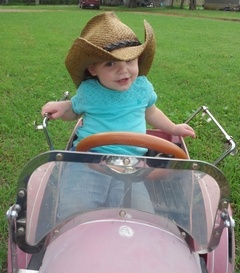 Moira Kathleen Knight died July 28, 2015 in Washington, Oklahoma at the age of 19 months 15 days. Funeral Services are scheduled for 1:00 PM, Saturday, August 1, 2015 at the Blanchard Ward, Church of Jesus Christ of Latter Day Saints. Interment will follow at Washington Cemetery under the care of Wadley’s Funeral Service.

Moira was born December 13, 2013 at OU Children’s Hospital in Oklahoma City, Oklahoma to William and Jennifer "Jenny" (Fowkes) Knight. Moira was eager to learn, and loved swimming, swinging, climbing everything. She loved playing with her brother, looking at books, drawing and anything paper. Moira was always eager to help and in doing so always said "here". She also had concern for those around her by saying "are you alright."

Moira is preceded in death by 2 siblings, David Eli and Christopher Roger. She is survived by her parents, William and Jenny Knight; her brother, Cameron Knight; paternal grandparents, David and Georgianne Knight, all of Washington; maternal grandparents, Roger and Kathy Fowkes of Mesa, Arizona; and numerous aunts, uncles, cousins, and other relatives and friends.

To order memorial trees or send flowers to the family in memory of Moira Knight, please visit our flower store.