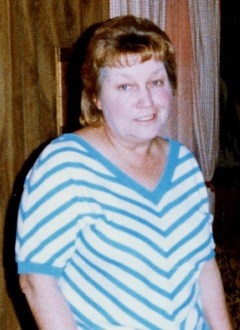 Nancy Louise Frair died June 4, 2017 at her daughters home in Wanette, Oklahoma at the age of 75 years 8 months 14 days. Memorial services are scheduled for 11:00 AM, Saturday, June 10, 2017 at the Wanette First Baptist Church. Services are entrusted to the care of Wadley’s Funeral Service of Purcell.

Nancy was born September 21, 1941 in Okmulgee, Oklahoma to Oral Alton and Margie (Pennington) Ford. She later moved to Oklahoma City, attending Franklin Schools where she met the love of her life, Jerry Frair. They were married in Elreno, Oklahoma on April 4, 1959 and were happily married for 46 years before Jerry’s passing. Nancy was a manager for Steve’s rental for several years, as well as working in day care. She then started her own family having 3 girls and 3 boys and one step son. After moving to Wanette, Nancy loved to travel with her husband, who was a truck driver. She also loved going on bus tours to Tunica, gambling with her sisters. Nancy enjoyed playing games on her computer, eating fudge bars and having Sunday dinners with her family.

To order memorial trees or send flowers to the family in memory of Nancy Frair, please visit our flower store.