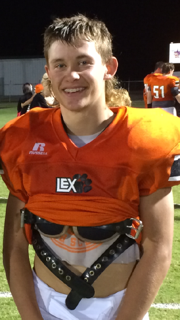 Nicholas "Nick" Braden Faught died March 29, 2015 at the age of 15 years 11 months 3 days. Funeral Services are scheduled for 10AM, Friday, April 3, 2015 at the First Baptist Church in Purcell. Interment will follow at Box Cemetery east of Lexington under the care of Wadley’s Funeral Service.

He was raised in Lexington, and a Freshman at Lexington High School. Nick was active in the FFA, football, baseball and power-lifting at Lexington Schools. He loved hunting, fishing, roping, spending time with his family and his friends. Nick also enjoyed working with his dad on the farm.

To order memorial trees or send flowers to the family in memory of Nicholas "Nick" Faught, please visit our flower store.