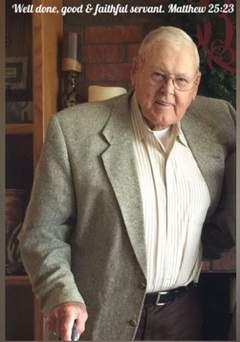 Raymond was born March 21, 1927 in Stringtown, Oklahoma to Ben and Neve (Perry) Lansdale. He was raised and attended school in Stringtown. Raymond was inducted into the United States Army and proudly served during World War II. He married the love of his life, Helen Francis Jones on September 14, 1949. They made their home mostly in Purcell, where they faithfully attended the Calvary Holiness Church. They shared everyday together for 67 years. Raymond was proud of his children and grandchildren. He retired from the oil field in 1988 but still continued to farm and raise cattle. He also enjoyed fishing and hunting.

Raymonds family is thankful for the exceptional care and out pouring of love at this difficult time. In lieu of flowers, the family asks that memorial contributions be made to Medical Research Foundation (Cancer Research) 825 N.E. 13th, Oklahoma City, OK 73104.

To order memorial trees or send flowers to the family in memory of Raymond Lansdale, please visit our flower store.