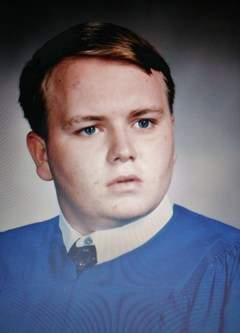 Richard Underhill died September 12, 2016 in Oklahoma City at the age of 40 years 10 months 6 days. Memorial Services are scheduled for 10:00 AM, Saturday, September 17, 2016 at Pecan Valley Baptist Church in Newalla, Oklahoma with Pastor Ed Moore officiating.  Services are entrusted to the care of Wadley's Funeral Service.

Richard was born November 6, 1975 in Oklahoma City, to Ronnie J and Yvonne (Saunders) Underhill. He was raised in the Norman area, attending school at Little Axe. Richard and Shelly have been together for many years, raising 3 daughters together. He worked in construction as a mason for many years. Richard was indeed a hard working man. He really enjoyed working with his hands. He loved being outside, fishing or hunting were his favorite things to do, as well as anything nature like. He loved being with his family. When his daughters were little he would always let them do his hair and paint his nails. When his granddaughter came along, he enjoyed playing princess tea parties. Most of all, Richard loved watching movies with his wife, considering it his "relaxing time." He was the love of his family and will be missed every minute of everyday.

To order memorial trees or send flowers to the family in memory of Richard Underhill, please visit our flower store.