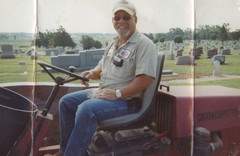 Rick was born January 6, 1964 in Monmouth, Illinois to Donald Lee and Joan Louise (Jones) Collins. He was raised in Monmouth, Illinois graduating around 1982. Rick was inducted into the United States Navy in February 1983, proudly serving for 4 years. He was honorably discharged in April 1987. Rick was a CLEET certified correctional officer, working in Florida before moving to Oklahoma. He worked for the State of Oklahoma as a Sargent for the prison system. In November 1999, Rick married Beverly Lee in Purcell, Oklahoma. They made Lexington their home. Rick worked for the City of Purcell as a grounds keeper at Hillside Cemetery. He loved reading and spending time with his grandkids.  Rick also enjoyed watching WWE wrestling.

To order memorial trees or send flowers to the family in memory of Rick Wooters, please visit our flower store.