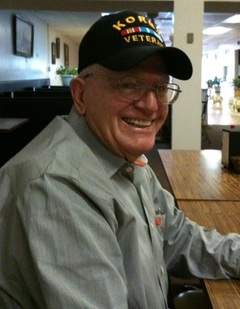 Bob was born June 27, 1934 to William Albert and Elsie Margaret (Schaefer) Hamilton in Minco, Oklahoma, where he was raised. On July 26, 1951, Bob was inducted into the United States Navy, proudly serving during the Korean Conflict. He was honorably discharged on June 6, 1955. On April 21, 1973, Bob married Tresia Ray in Norman, Oklahoma. They made their home in the Lexington area. Bob worked as a Truck Driver for Roadway until his retirement around 1996. Bob went back to work transporting new horse trailers for local trailer manufacturers, and also  horses for local Vet clinics. He raised Quarter Horses and enjoyed riding cutting horses and ranch horses. Bob was a member of the AQHA for many years, and He and Teri enjoyed attending the PBR. Bob enjoyed spending time with the guys and met every morning at Sonny’s to solve the world’s problems. He was active until his health declined 4 years ago.

Bob is preceded in death by his parents, William and Elsie Hamilton; brothers, Richard Hamilton, Billy Hamilton, Warren Hamilton and Jack Hamilton. Survivors include his wife, Teri of the home; daughter, Aleasha Hamilton-Meskimen and husband, Brian of Purcell; granddaughter on the way, Maddison Ray Meskimen; sister, Mary Hamilton of Midwest City; sister-in-law, Connie Barnes of Jones, Oklahoma; and numerous nieces, nephews, and other relatives and friends.

To order memorial trees or send flowers to the family in memory of Robert "Bob" Hamilton, please visit our flower store.