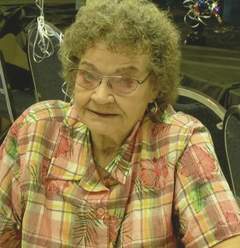 Ruth Frances Webb died September 24, 2014 in Oklahoma City, Oklahoma at the age of 77 years 5 months 19 days. Funeral Services are scheduled for 2:00 PM, Saturday, September 27, 2014 at Thunderbird Baptist Church in Norman, Oklahoma. Interment will follow at Fairview Maguire Cemetery in Noble, Oklahoma under the care of Wadley’s Funeral Service. Online condolences may be made at wadleysfuneralservice.com

Ruth was born April 5, 1937 in Okemah, Oklahoma to Joseph and Mary (Borlen) Keener. She was raised in Okemah, graduating around 1955. She continued her education at a community college, majoring in accounting. Ruth worked in the grocery clerk and a hotel clerk for many years. She and Steven Szeperdei were united in marriage on February 12, 1983 in Lexington, Oklahoma. Ruth enjoyed sewing and going to flew markets. She was a good natured and loving sweet person. Ruth was of the Baptist faith.

To order memorial trees or send flowers to the family in memory of Ruth Webb, please visit our flower store.