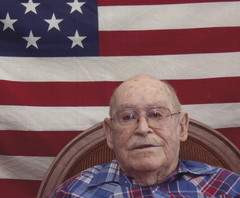 Bill was born July 29, 1920 in Holdenville, Oklahoma to Edmond George and Lula Bell (Simmons) Page. He was raised and attended school in Holdenville before enlisting in the United States Army on December 17, 1942. He was honorably discharged after serving during WWII on January 13, 1946. Bill worked for the FAA as a Fire & Safety Inspector for many years. On December 10, 1970, he married Jo Lyn Farris in Hot Springs, Arkansas and they made their home in Purcell, Oklahoma. Bill enjoyed riding horses, farming, and going to church. He was of the Assembly of God faith and attended Memorial Assembly of God.

Bill is preceded in death by his parents, his siblings, Odessa Venable, Edna Sherman, Jess Page and 5 half sisters. Survivors include his wife, Jo Lyn Page of the home; daughters, Karen Harrison and husband, Jason of Woodward, Janet Hood and husband, Shane of Edmond, Kathy Carter and husband, Odis of Bethany; grandchildren, Bradley, Vanessa, Jonathan, Taylor, Hunter, Kylie and Addison; 11 great grandchildren, and many other relatives and friends.

To order memorial trees or send flowers to the family in memory of Shadrach Page, please visit our flower store.