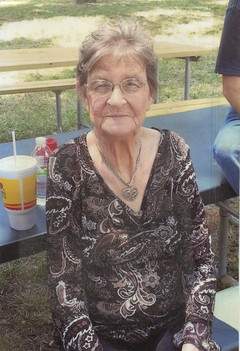 Stella was born June 8, 1938 in Oklahoma City, Oklahoma to Alvin Lawson and Edna Katherine (Whitson) Taylor. She was raised in Oklahoma City, attending Central High School. Stella married Bruce Spicer in Oklahoma City on September 30, 1960. She worked in the restaurant industry for many years. Her jobs included waitress, business owner and cook extra ordinaire. Stella loved spending time with her family and friends. She also enjoyed playing her poker games, scratch off lottery tickets, cooking, watching game shows and music. Stella was loved by many, and spent her life giving of herself to the people who meant so much to her. It didn’t matter whether they were family, friend, or those that had no one else. Stella fed and took care of them out of the kindness of her huge heart. Always giving, rarely taking. She gave joy to the many people she served in her years as a waitress and a cook. Even after retiring from the serice industry, people would comment on how much they missed her cooking. Stella’s days of suffering and pain are now over, she is now amongst the angels with the loved ones who left before her. She will be missed by so many whose lives she touched and our hearts will forever be filled with the love she so openly gave.

To order memorial trees or send flowers to the family in memory of Stella Taylor, please visit our flower store.